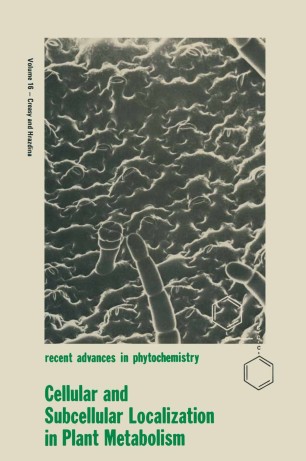 Morphological differences between cells and the exis­ tence of morphologically distinct particles have been examined since cells were first recognized. Each techno­ logical advance in detection and visualization has led to the description of different organelles and cell types. Basic biochemical processes in cells were recognized and are now weIl understood. It is only recently however, that research has expanded to include the specific meta­ bolic function of the specialized cell types and organelles. In some cases metabolic roles were recognized when the organelles were first described, e.g., chloroplasts, mito­ chondria, etc., in others the metabolic role remains unknown. Chemical and biochemical specialization in plants or their organelles is equally challenging. Although biochemists have laboured intensivelyon many isolated plant organelles, it is only recently that technical advances have permitted the examination of specialization in the metabolism of cell types. This area of research, although under intensive investigation in some areas of plant metabolism, is still in its infancy. Further developments in methodology or in production of specific genetic lines of plants will greatly improve our understanding of the specialization of different tissues and cell types. This volume describes the current status in the dis­ cipline as presented in a Symposium on the Cellular and Subcellular Specialization in Plant Metabolism during the Annual Meeting of the Phytochemical Society of North America, at Cornell University, Ithaca, N.Y., on August 10-14, 1981.