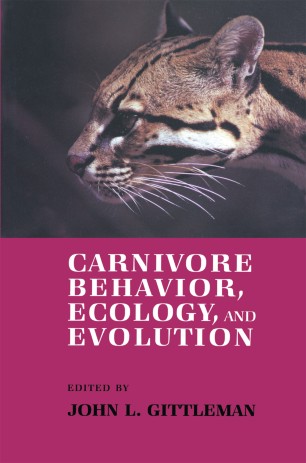 Carnivores have always fascinated us, even though they make up only 10% of all mammalian genera and only about 2% of all mammalian biomass. In Greek mythology most of the gods adorned their robes and helmets with depictions of carnivores, and the great hero Hercules' most famous feat was killing the "invulnerable" lion with his bare hands. Part· of our fascination with carnivores stems from fright and intrigue, and sometimes even hatred because of our direct competition with them. Cases of "man-eating" lions, bears, and wolves, as well as carnivores' reputation as killers of livestock and game, provoke communities and governrpents to adopt sweeping policies to exterminate them. Even President Theodore Roosevelt, proclaimer of a new wildlife protectionism, described the wolf as "the beast of waste and desolation. " The sheer presence and power of carnivores is daunt­ ing: they can move quickly yet silently through forests, attaining rapid bursts of speed when necessary; their massive muscles are aligned to deliver powerful attacks, their large canines and strong jaws rip open carcasses, and their scis­ sor-like carnassials slice meat. Partly because of our fear of these attributes, trophy hunting of carnivores has been, and to a certain extent still is, a sign of bravery and skill. Among some Alaskan Inuit, for example, a man is not eligible for marriage until he has killed a succession of animals of increasing size and dangerousness, culminating with the most menacing, the polar bear.