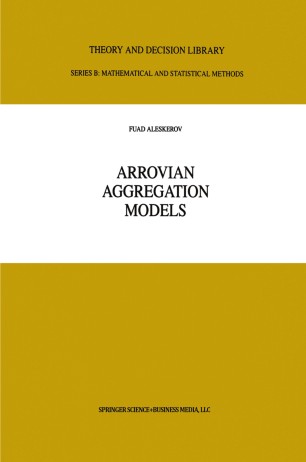 Aggregation of individual opinions into a social decision is a problem widely observed in everyday life. For centuries people tried to invent the `best' aggregation rule. In 1951 young American scientist and future Nobel Prize winner Kenneth Arrow formulated the problem in an axiomatic way, i.e., he specified a set of axioms which every reasonable aggregation rule has to satisfy, and obtained that these axioms are inconsistent. This result, often called Arrow's Paradox or General Impossibility Theorem, had become a cornerstone of social choice theory. The main condition used by Arrow was his famous Independence of Irrelevant Alternatives. This very condition pre-defines the `local' treatment of the alternatives (or pairs of alternatives, or sets of alternatives, etc.) in aggregation procedures.
Remaining within the framework of the axiomatic approach and based on the consideration of local rules, Arrovian Aggregation Models investigates three formulations of the aggregation problem according to the form in which the individual opinions about the alternatives are defined, as well as to the form of desired social decision. In other words, we study three aggregation models. What is common between them is that in all models some analogue of the Independence of Irrelevant Alternatives condition is used, which is why we call these models Arrovian aggregation models.
Chapter 1 presents a general description of the problem of axiomatic synthesis of local rules, and introduces problem formulations for various versions of formalization of individual opinions and collective decision. Chapter 2 formalizes precisely the notion of `rationality' of individual opinions and social decision. Chapter 3 deals with the aggregation model for the case of individual opinions and social decisions formalized as binary relations. Chapter 4 deals with Functional Aggregation Rules which transform into a social choice function individual opinions defined as choice functions. Chapter 5 considers another model &endash; Social Choice Correspondences when the individual opinions are formalized as binary relations, and the collective decision is looked for as a choice function. Several new classes of rules are introduced and analyzed.