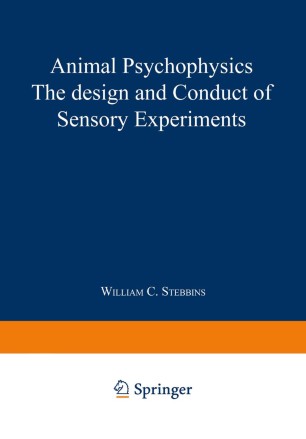 Animal Psychophysics: the design and conduct of sensory experiments

In May of 1969, the contributors to this book gathered at the University of Michigan in Ann Arbor for three days to talk about their work in the behavioral analysis of animal sensory function and to share their research experiences in the laboratory with particular emphasis on methodology in behavioral training, testing, and instrumentation. It was their feeling and mine as a consequence of this meeting that we had sufficient substance to justify a book which we hoped would be of interest and even of pragmatic value to any biologic or biomedical scientist whose work deals with sensory function. Clearly, there is no aspect of an organism's behavior that is not to some extent con­ trolled by environmental stimuli. In recent years, due in large part to technical advances in microscopy and histology and in electrophysiology, there have been several extremely informative published proceedings from conferences and symposia concerned with some of the early and very basic stages in the reception of environmental energy by the sense organs and its processing by the nervous system. Transduction at the receptor and stimulus coding by the nervous system, cell membrane changes, and the basic structure of the receptor and related tissue as seen through the electron and phase contrast microscope have received major attention, and exciting new discoveries in sen­ sory function and structure have been reported. Ultimately, such discoveries must be related to an intact behaving organism.