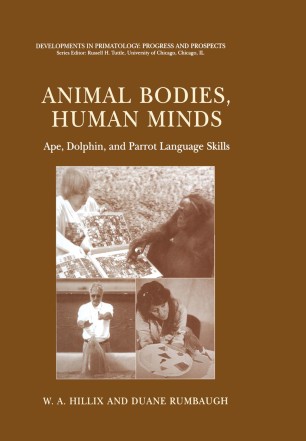 Several books chronicle attempts, most of them during the last 40 years, to teach animals to communicate with people in a human-designed language. These books have typically treated only one or two species, or even one or a few research projects. We have provided a more encompassing view of this field. We also want to reinforce what other authors, for example Jane Goodall, Sue Savage-Rumbaugh, Penny Patterson, Birute Galdikas, and Roger and Deborah Fouts, so passionately convey about our responsibility for our closest animal kin.

This book surveys what was known, or believed about animal language throughout history and prehistory, and summarizes current knowledge and the controversy around it. The authors identify and attempt to settle most of the problems in interpreting the animal behaviours that have been observed in studies of animal language ability.