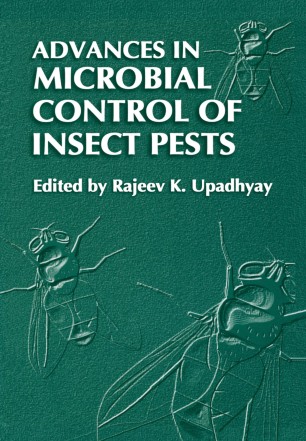 The insect!1 remain in symbiotic associations with a tremendous number of microorganisms, and some of them could be classified as parasitic/pathogenic. Without question, insect pathogens act as natural mortality agents and represent the third leg of the triad of biological control which is an environmentally sound alternative to chemical control. The virulence and pathogenicity of an insect parasite i. e. disease agent are determined by the microbial genome as a result of the coordinated expression of a concert of genes. These genes may be organized as cassettes and be associated with transmissible DNA. The acquisition of these domains or pathogenicity islands, may be sufficient to develop a transgenic virulent pathogen. The insect pathogens are very specific and this property can be exploited in making insects sick. However, rarely have field applications of highly virulent strains of viruses, fungi, bacteria, protozoa resulted in massive insect population reductions or induced widespread, persistent epizootics as the same is also governed by host susceptibility regulated by genetics, age, sex and physiological state of the host. Insect pathogens causing acute or chronic diseases must be able to persist in the environment, to multiply in the host, and to spread to other susceptible hosts. In this book, I have attempted to bring together all recent studies regarding both fundamental and more applied research aspects related to entomopathogens, bacteria, viruses, fungi and nematodes in order to facilitate their development and commercial exploitation.