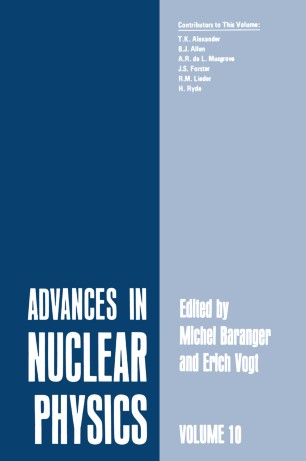 The present volume reaffirms nuclear physics as an experimental science since the authors are primarily experimentalists and since the treatment of the topics might be said to be "experimental." (This is no reflection on the theoretical competence of any of the authors.) The subject of high-spin phenomena in heavy nuclei has grown much beyond the idea of "backbending" which gave such an impetus to its study five years ago. It is a rich, new field to which Lieder and Ryde have contributed greatly. The article "Valence and Doorway Mechanisms in Resonance Neutron Capture" is, in contradistinction, an article pertaining to one of the oldest branches of nuclear physics-and it brings back one of our previous authors. The Doppler-shift method, reviewed by Alexander and Forster, is one of the important new experimental techniques that emerged in the previous decade. This review is intended, deliberately, to describe thoroughly a classic technique whose elegance epitomizes much of the fascination which nuclear physics techniques have held for a generation of scientists. This volume concludes the work on the Advances in Nuclear Physics series of one of the editors (M. Baranger), whose judgment and style characterize that which is best in the first ten volumes. Many of our readers and most of our authors will be grateful for the high standards which marked his contributions and which often elicited extra labor from the many authors of the series.