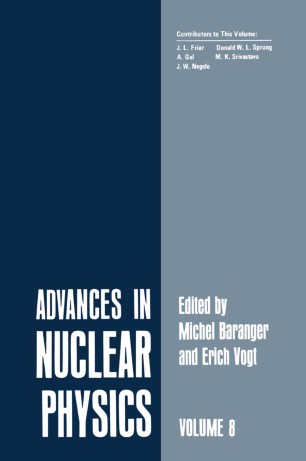 Review articles on three topics of considerable current interest make up the present volume. The first, on A-hypernuclei, was solicited by the editors in order to provide nuclear physicists with a general description of the most recent developments in a field which this audience has largely neglected or, perhaps, viewed as a novelty in which a bizarre nuclear system gave some information about the lambda-nuclear intersection. That view was never valid. The very recent developments reviewed here-particularly those pertaining to hypernuclear excitations and the strangeness exchange reactions-emphasize that this field provides important information about the models and central ideas of nuclear physics. The off-shell behavior of the nucleon-nucleon interaction is a topic which was at first received with some embarrassment, abuse, and neglect, but it has recently gained proper attention in many nuclear problems. Interest was first focused on it in nuclear many-body theory, but it threatened nuclear physicists'comfortable feeling about nonrelativistic potential theory, and many no doubt hoped that it would remain merely an esoteric diversion within the many-body cult. In the editors' opinion, this subject is now emi­ nently respectable and a review of it indeed timely. The third topic, nuclear charge distributions, is one which almost every nuclear physicist believed had been weIl in hand for some years.