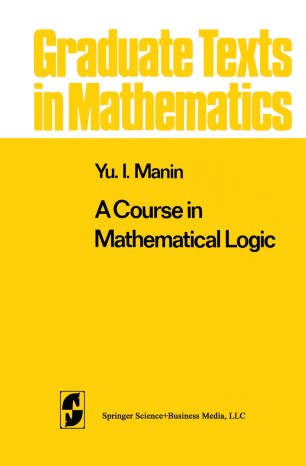 A Course in Mathematical Logic

1. This book is above all addressed to mathematicians. It is intended to be a textbook of mathematical logic on a sophisticated level, presenting the reader with several of the most significant discoveries of the last ten or fifteen years. These include: the independence of the continuum hypothe­ sis, the Diophantine nature of enumerable sets, the impossibility of finding an algorithmic solution for one or two old problems. All the necessary preliminary material, including predicate logic and the fundamentals of recursive function theory, is presented systematically and with complete proofs. We only assume that the reader is familiar with "naive" set theoretic arguments. In this book mathematical logic is presented both as a part of mathe­ matics and as the result of its self-perception. Thus, the substance of the book consists of difficult proofs of subtle theorems, and the spirit of the book consists of attempts to explain what these theorems say about the mathematical way of thought. Foundational problems are for the most part passed over in silence. Most likely, logic is capable of justifying mathematics to no greater extent than biology is capable of justifying life. 2. The first two chapters are devoted to predicate logic. The presenta­ tion here is fairly standard, except that semantics occupies a very domi­ nant position, truth is introduced before deducibility, and models of speech in formal languages precede the systematic study of syntax.