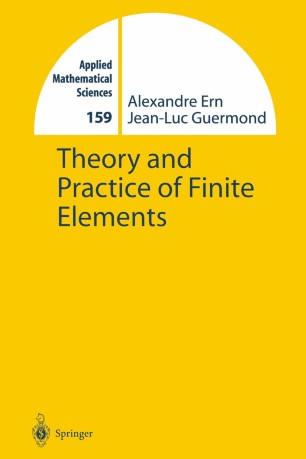 Theory and Practice of Finite Elements

This book presents the mathematical theory of finite elements, starting from basic results on approximation theory and finite element interpolation and building up to more recent research topics, such as and Discontinuous Galerkin, subgrid viscosity stabilization, and a posteriori error estimation.

The body of the text is organized into three parts plus two appendices collecting the functional analysis  results used in the book. The first part develops the theoretical basis for the finite element method and emphasizes the fundamental role of inf-sup conditions. The second party addresses various applications encompassing elliptic PDE's, mixed formulations, first-order PDEs, and the time-dependent versions of these problems. The third part covers implementation issues and should provide readers with  most of  the practical details needed to write or understand a finite element code.

Written at the graduate level, the text contains numerous examples and exercises and is intended to serve as a graduate textbook. Depending on one's interests, several reading paths can be followed, emphasizing either theoretical results, numerical algorithms, code efficiency, or applications in the engineering sciences.

The book will be useful to researchers and graduate students in mathematics, computer science and engineering.