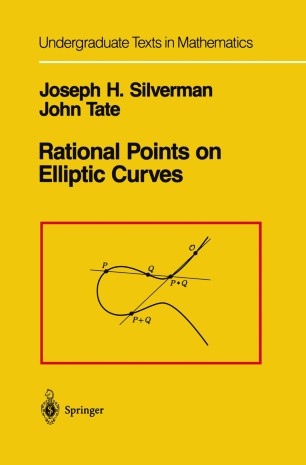 In 1961 the second author deliv1lred a series of lectures at Haverford Col­ lege on the subject of "Rational Points on Cubic Curves. " These lectures, intended for junior and senior mathematics majors, were recorded, tran­ scribed, and printed in mimeograph form. Since that time they have been widely distributed as photocopies of ever decreasing legibility, and por­ tions have appeared in various textbooks (Husemoller [1], Chahal [1]), but they have never appeared in their entirety. In view of the recent inter­ est in the theory of elliptic curves for subjects ranging from cryptogra­ phy (Lenstra [1], Koblitz [2]) to physics (Luck-Moussa-Waldschmidt [1]), as well as the tremendous purely mathematical activity in this area, it seems a propitious time to publish an expanded version of those original notes suitable for presentation to an advanced undergraduate audience. We have attempted to maintain much of the informality of the orig­ inal Haverford lectures. Our main goal in doing this has been to write a textbook in a technically difficult field which is "readable" by the average undergraduate mathematics major. We hope we have succeeded in this goal. The most obvious drawback to such an approach is that we have not been entirely rigorous in all of our proofs. In particular, much of the foundational material on elliptic curves presented in Chapter I is meant to explain and convince, rather than to rigorously prove.