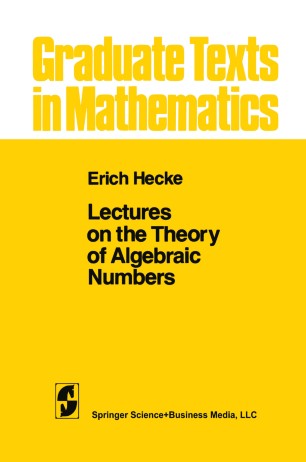 Lectures on the Theory of Algebraic Numbers

. . . if one wants to make progress in mathematics one should study the masters not the pupils. N. H. Abel Heeke was certainly one of the masters, and in fact, the study of Heeke L­ series and Heeke operators has permanently embedded his name in the fabric of number theory. It is a rare occurrence when a master writes a basic book, and Heeke's Lectures on the Theory of Algebraic Numbers has become a classic. To quote another master, Andre Weil: "To improve upon Heeke, in a treatment along classical lines of the theory of algebraic numbers, would be a futile and impossible task. " We have tried to remain as close as possible to the original text in pre­ serving Heeke's rich, informal style of exposition. In a very few instances we have substituted modern terminology for Heeke's, e. g. , "torsion free group" for "pure group. " One problem for a student is the lack of exercises in the book. However, given the large number of texts available in algebraic number theory, this is not a serious drawback. In particular we recommend Number Fields by D. A. Marcus (Springer-Verlag) as a particularly rich source. We would like to thank James M. Vaughn Jr. and the Vaughn Foundation Fund for their encouragement and generous support of Jay R. Goldman without which this translation would never have appeared. Minneapolis George U. Brauer July 1981 Jay R.