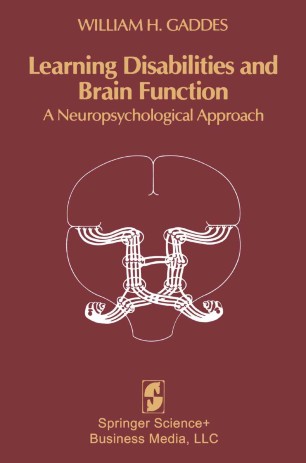 Some may say that this book is long overdue; others, including myself, will state that the book appears atjust the right time. The latter is likely more true, for it is doubtful that many in the professions would, until now, link issues of learning disabilities with those of neurophysiological dysfunction in the manner in which ultimately must be the case. As a matter of fact, there are those who deny the relationship completely. Lee Wiederholt (1974)1 in his short, but excellent, review of the historical perspectives of learning disabilities, traces the early interest in this problem to the work of Gall (1802), and to his successors Broca (1861), Jackson (1864), Bastian (1869), and a few others. Each of these men would, at the time of this writing, be considered to have interests in the field of neurology, although at the time of their investigations, neurology per se was but a gleam in the eye of the anatomical beholder. A relative detour then took place. Cerebral palsy, in the decades of the 1940s and 1950s, caught the attention of researchers through the work of Winthrop Morgan Phelps (orthopedist) and George Deaver (physiatrist) and one or two other medically oriented individuals. This was related to the writings of W. J. Little (1810-1894). It was, however, Kurt Goldstein, Heinz Wemer, both eminent German scientists, and Alfred A.