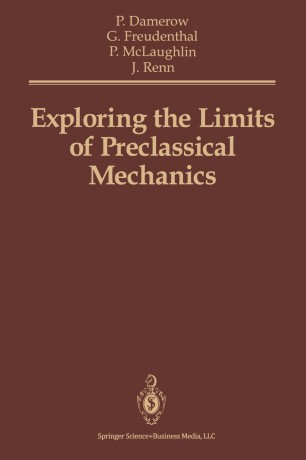 Exploring the Limits of Preclassical Mechanics

A Study of Conceptual Development in Early Modern Science: Free Fall and Compounded Motion in the Work of Descartes, Galileo and Beeckman

The question of when and how the basic concepts that characterize modern science arose in Western Europe has long been central to the history of science. This book examines the transition from Renaissance engineering and philosophy of nature to classical mechanics oriented on the central concept of velocity. Descartes, Galileo, and other protagonists of what the authors call "preclassical mechanics" struggled with fundamental concepts and contributed crucial insights to classical mechanics, but it is not clear that they actually realized these insights themselves. This book argues that the emergence of classical mechanics was neither a cumulative change nor an abrupt revolution, but rather that the transformation was the result of exploring the limits and exhausting the possibilities of the existing, largely Aristotelian conceptual system.

In the dozen years that have passed since the appearance of the first edition, significant research has been done on Descartes and Galileo and the origins of modern science. There have also been important advances in the accessibility of sources and in technology for analyzing them. For this new edition, the authors take account of the most important new results. They include a new discussion of the doctrine of proportions, an analysis of the role of traditional statics in the construction of Descartes' impact rules, and go deeper into the debate between Descartes and Hobbes on the explanation of refraction. They also provide significant new material on the early development of Galileo's work on mechanics and the law of fall. All translations have been reviewed and revised for consistency of terminology and several new documents have been added. The bibliography has been updated to take account of new literature.