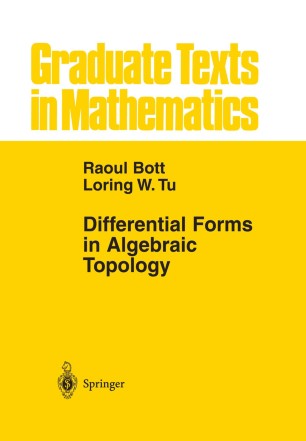 The guiding principle in this book is to use differential forms as an aid in exploring some of the less digestible aspects of algebraic topology. Accord­ ingly, we move primarily in the realm of smooth manifolds and use the de Rham theory as a prototype of all of cohomology. For applications to homotopy theory we also discuss by way of analogy cohomology with arbitrary coefficients. Although we have in mind an audience with prior exposure to algebraic or differential topology, for the most part a good knowledge of linear algebra, advanced calculus, and point-set topology should suffice. Some acquaintance with manifolds, simplicial complexes, singular homology and cohomology, and homotopy groups is helpful, but not really necessary. Within the text itself we have stated with care the more advanced results that are needed, so that a mathematically mature reader who accepts these background materials on faith should be able to read the entire book with the minimal prerequisites. There are more materials here than can be reasonably covered in a one-semester course. Certain sections may be omitted at first reading with­ out loss of continuity. We have indicated these in the schematic diagram that follows. This book is not intended to be foundational; rather, it is only meant to open some of the doors to the formidable edifice of modern algebraic topology. We offer it in the hope that such an informal account of the subject at a semi-introductory level fills a gap in the literature.