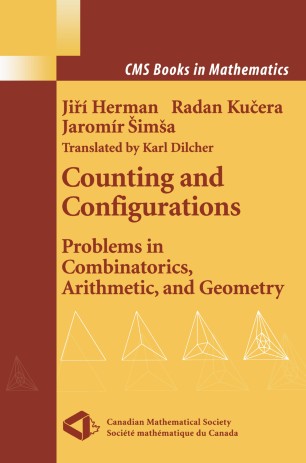 Problems in Combinatorics, Arithmetic, and Geometry

This book presents methods of solving problems in three areas of elementary combinatorial mathematics: classical combinatorics, combinatorial arithmetic, and combinatorial geometry. In each topic, brief theoretical discussions are immediately followed by carefully worked-out examples of increasing degrees of difficulty, and by exercises that range from routine to rather challenging. While this book emphasizes some methods that are not usually covered in beginning university courses, it nevertheless teaches techniques and skills that are useful not only in the specific topics covered here. There are approximately 310 examples and 650 exercises.

Jirí Herman is the headmaster of a prestigious secondary school (Gymnazium) in Brno, Radan Kucera is Associate Professor of Mathematics at Masaryk University in Brno, and Jaromír Simsa is a researcher at the Mathematical Institute of the Academy of Sciences of the Czech Republic. The translator, Karl Dilcher, is Professor of Mathematics at Dalhousie University in Canada. This book can be seen as a continuation of the previous book by the same authors and also translated by Karl Dilcher, Equations and Inequalities: Elementary Problems and Theorems in Algebra and Number Theory (Springer-Verlag 2000).