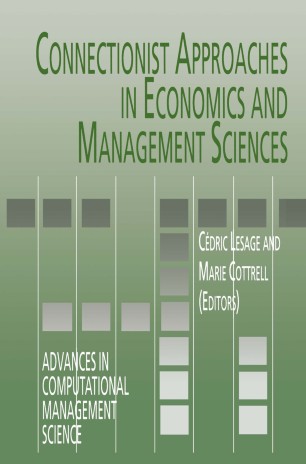 Since the beginning of the 1980's, a lot of news approaches of biomimetic inspiration have been defined and developed for imitating the brain behavior, for modeling non linear phenomenon, for providing new hardware architectures, for solving hard problems. They are named Neural Networks, Multilayer Perceptrons, Genetic algorithms, Cellular Automates, Self-Organizing maps, Fuzzy Logic, etc. They can be summarized by the word of Connectionism, and consist of an interdisciplinary domain between neuroscience, cognitive science and engineering. First they were applied in computer sciences, engineering, biological models, pattern recognition, motor control, learning algorithms, etc. But rapidly, it appeared that these methods could be of great interest in the fields of Economics and Management Sciences. The main difficulty was the distance between researchers, the difference in the vocabulary used by the ones and the others, their basic background. The main notions used by these new techniques were not familiar to the Social and Human Sciences researchers. What are they ? Four of them are now very briefly introduced, but the reader will find more information in the following chapters.