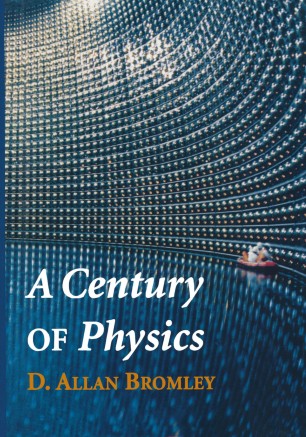 A Century of Physics

In this amazing tour d'horizon, D. Allan Bromley uses the occasion of the centenary of the American Physical Society to reflect upon the growth of physics over the past 100 years, its fragmentation into numerous subdisciplines, the impact physics has had upon modern technology, and the re-emergence of the fundamental unity of the discipline in recent years. Hundreds of historical illustrations accompany the text. Bromley conveys much of the excitement and wonder that research in physics generated in the 20th century and asks what new things are in store in the next century. He covers such topics as relativity and quantum mechanics, the Manhattan project, superconductivity, transistors and the revolution brought about by solid-state electronics, protein folding, the uses of nuclear and atomic physics in biology and medicine, plate tectonics, the expansion of the universe and the Big Bang, and gravitational radiation. Bromley, the Sterling Professor of the Sciences and Dean of Yale University, served as Assistant to the President for Science and Technology Policy 1989-1993 and was president of the American Physical Society in 1997. One of the World's leading nuclear scientists, he was founder and director of Yale's nuclear structure laboratory and has received numerous medals and awards, including the National Medal of Science.

"...A panoramic view of the physics landscape of the past century, in which are embedded an impressive number of major physics accomplishments. And [the book] describes these accomplishments in a language that is comprehensible to an educated reader with or without training in physics...In choice of topics, Bromley is about as complete as can be imagined...An immensely entertaining and illuminating read."                                PHYSICS TODAY

"Springer presents an expanded narrative with Bromley’s fine sampling of images of 20th-century physics...Bromley’s upbeat text will convince you that there’s a wealth of work to keep physicists busy while Super-K is put back together."

"Pictures are the stars of this book, bringing the highly readable narrative to life. The reader’s eyes are spoiled by images...he covers topics as diverse as superconductivity and the evolution of computers...and covers the research activity of laboratories all around the world."

PHYSICS TODAY
"The accomplishments of physics in the 20th century are among the most illustrious achievements of our civilization, and Bromley is certainly one of those advocates of physics with the credentials to articulate them. Given so nearly impossible a task, Bromley nevertheless manages to pull it off…in a language that is comprehensible to an educated reader with or without training in physics…In choice of topics, Bromley is about as complete as can be imagined…I found the volume to be an immensely entertaining and illuminating read, and I was greatly impressed by the amount of thought and just plain hard work the author imposed on himself to get it done.”