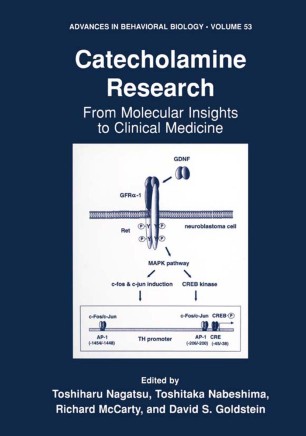 From Molecular Insights to Clinical Medicine

This book is based on invited presentations at the Ninth International Catecholamine Symposiwn. Over several decades, each International Catecholamine Symposiwn (ICS) has provided a uniquely important forwn for updating basic as well as clinical research on the catecholamines, dopamine, norepinephrine, and epinephrine. The first ICS took nd n1 place in Bethesda, Maryland, in the USA in 1958; the 2 in Milan, Italy in 1965; the 3 th in Strasbourg, France in 1973; the 4th in Asilomar, California, USA in 1978; the 5 in th th Goteborg, Sweden in 1983; the 6 in Jerusalem, Israel,in 1987; the 7 in Amsterdam, th Netherlands in 1992; and the 8 in Asilomar, California, USA in 1996. th The 9 International Catecholamine Symposiwn (9ICS) was held in Kyoto, Japan, th March 31-April 5, 2001. This ICS was held concurrently with the 5 International th Conference on Progress in Alzheimer's and Parkinson's Disease (5 ADPD). These international meetings were coordinated to be a joint international congress. Catecholamines and related neurotransmitters and neuromediators play important roles in the pathogenesis of symptoms and neurodegenerative processes of Alzheimer's disease and Parkinson's disease. Therefore, the Joint Congress provided an opportunity for investigators and clinicians working in these fields to exchange their· most recent investigational results and clinical experiences. This Joint International Congress turned out to be an enormous success, attended by 1258 participants from 38 countries, in an enthusiastic and pleasant atmosphere.