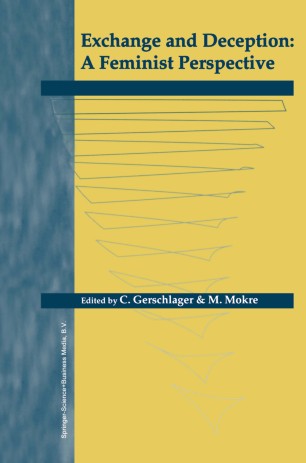 Exchange and Deception: A Feminist Perspective

economic modelling and thought. Part three presents two case studies as examples of deceptive autonomy and shows the impact of this deception on the situation of women from the viewpoint of cultural studies and social anthropology. Part four relates methodological reflections on feminist and mainstream economics to the theme of the book. The first part of this book is devoted to a reconsideration of Adam Smith as a starting point for feminist perspectives on exchange. Drawing on Adam Smith's Theory of Moral Sentiments Caroline Gerschlager sets the stage for expanding the economic concept of exchange. She analyses and develops Smith's insight that deception is inevitable in the social setting. Smith's system of sympathy, which Gerschlager analyses as a system of exchange, i.e. exchange is conceived in terms of changing places in the imagination, is compared with exchange as conceived by the neoclassical approach. Her analysis reveals that these approaches arrive at contrasting results with regard to deception. Whereas in the former deception is vital to an understanding of exchange, the latter regards deception as an inefficiency, hindering exchange and ultimately making it impossible. Gerschlager points out that a certain degree of deception is inevitable, and that living in society therefore also amounts to "deceiving and being deceived".