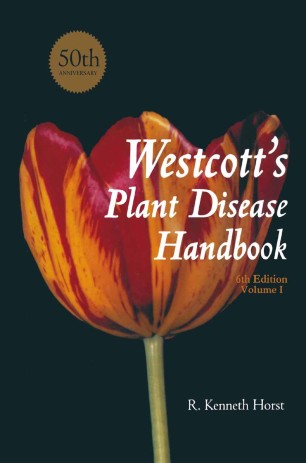 It was a compliment to me to be asked to prepare the fourth edition of Westcott's Plant Disease Handbook, and the decision to accept the respon­ sibility for the fourth edition, the fifth edition, and now the sixth edition was not taken lightly. The task has been a formidable one. I have always had great respect professionally for Dr. Cynthia Westcott. That respect has grown considerably with the completion of the three editions. I now fully realize the tremendous amount of effort expended by Dr. Westcott in de­ veloping the Handbook. A book such as this is never finished, since one is never sure that everything has been included that should be. I would quote and endorse the words of Dr. Westcott in her preface to the first edition: "It is easy enough to start a book on plant disease. It is impossible to finish it. . . " This revision of the Handbook retains the same general format contained in the previous editions. The chemieals and pesticides regulations have been updated; major taxonomie changes have been made in the bacteria, fungi, nematodes and viruses; the changing pieture in diseases caused by viruses and/ or viruslike agents have been described. New host plants have been added, and many recently reported diseases as weIl as previously known diseases listed now on new hosts have been included.