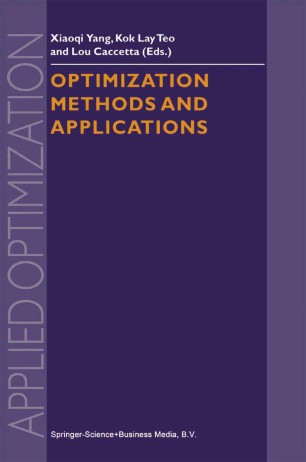 This edited book is dedicated to Professor N. U. Ahmed, a leading scholar and a renowned researcher in optimal control and optimization on the occasion of his retirement from the Department of Electrical Engineering at University of Ottawa in 1999. The contributions of this volume are in the areas of optimal control, non­ linear optimization and optimization applications. They are mainly the im­ proved and expanded versions of the papers selected from those presented in two special sessions of two international conferences. The first special session is Optimization Methods, which was organized by K. L. Teo and X. Q. Yang for the International Conference on Optimization and Variational Inequality, the City University of Hong Kong, Hong Kong, 1998. The other one is Optimal Control, which was organized byK. ~Teo and L. Caccetta for the Dynamic Control Congress, Ottawa, 1999. This volume is divided into three parts: Optimal Control; Optimization Methods; and Applications. The Optimal Control part is concerned with com­ putational methods, modeling and nonlinear systems. Three computational methods for solving optimal control problems are presented: (i) a regularization method for computing ill-conditioned optimal control problems, (ii) penalty function methods that appropriately handle final state equality constraints, and (iii) a multilevel optimization approach for the numerical solution of opti­ mal control problems. In the fourth paper, the worst-case optimal regulation involving linear time varying systems is formulated as a minimax optimal con­ trol problem.