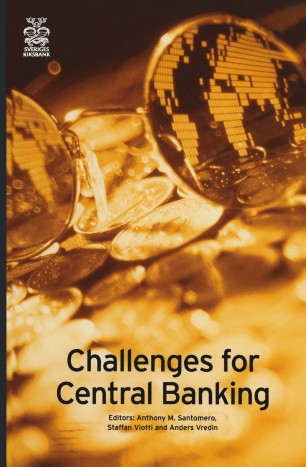 It may be possible to claim that, generally speaking, central banks around the world have never before held such a central and well-respected position in their respective countries as they hold now. Their tasks seem to be reasona­ bly well defined and the mandate given to them to guarantee price stability has so far worked more successfully than was perhaps expected. Inflation is lower than it has been for a long time. One central bank after the other has been given a position independent of normal party political processes. Re­ search concerning monetary policy and other topics of relevance for central banking has made good progress during the past decade. Much of the mys­ tique that has typically surrounded the internal work and decision-making of central banks has gradually disappeared. Instead, openness and transparency have become the key words of the day. The communication channels of central banks; speeches, inflation reports, minutes of meetings, etc. receive considerable attention and often give rise to headlines in the media. The en­ vironment in which central banks work and act today has thus undergone changes that in my view are very positive. However, we should always be on our guard against complacency. It would be most dangerous for central bankers today to sit back and relax in the belief that all of the important problems have been resolved and need no further consideration. Unless central bankers remain constantly alert and vigilant, their policy-making can easily deteriorate.

`This volume offers a comprehensive examination of what central banks have done, what they can do and, most importantly, what they should and should not do. The essays provide penetrating analyses of the key issues facing central banks at the dawn of a new century. High on this agenda are the challenges of financial innovations for the supervision and stability of financial institutions and the competition from private e-money sources in the provision of monetary and payment services.'
R.S. Kroszner, Professor of Economics, Graduate School of Business, University of Chicago
`What should central bankers do in a world where banks are buffeted by competition and technological change? The articles in this book, written in lucid prose by some of the best researchers in the area, reflect the latest thinking on the question. The book is a `must read' for anyone interested in banking and monetary policy.'
R. Rajan, J.L. Gidwitz Professor of Finance, Graduate School of Business, University of Chicago
`Challenges for Central Banking brings together the contributions of a selected group of economists on key issues in the monetary stability and the financial stability role of central banks. It will be very valuable reading for both central bankers and academics interested in monetary policy and banking regulation and supervision.'
R. Repullo, Professor of Economics and Director, CEMFI