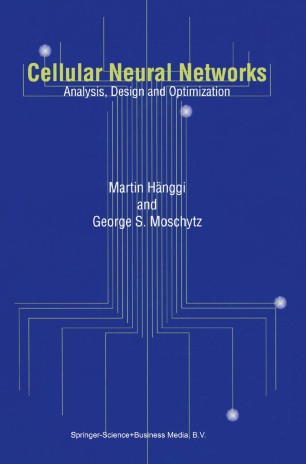 Cellular Neural Networks (CNNs) constitute a class of nonlinear, recurrent and locally coupled arrays of identical dynamical cells that operate in parallel. ANALOG chips are being developed for use in applications where sophisticated signal processing at low power consumption is required.
Signal processing via CNNs only becomes efficient if the network is implemented in analog hardware. In view of the physical limitations that analog implementations entail, robust operation of a CNN chip with respect to parameter variations has to be insured. By far not all mathematically possible CNN tasks can be carried out reliably on an analog chip; some of them are inherently too sensitive. This book defines a robustness measure to quantify the degree of robustness and proposes an exact and direct analytical design method for the synthesis of optimally robust network parameters. The method is based on a design centering technique which is generally applicable where linear constraints have to be satisfied in an optimum way.
Processing speed is always crucial when discussing signal-processing devices. In the case of the CNN, it is shown that the setting time can be specified in closed analytical expressions, which permits, on the one hand, parameter optimization with respect to speed and, on the other hand, efficient numerical integration of CNNs. Interdependence between robustness and speed issues are also addressed. Another goal pursued is the unification of the theory of continuous-time and discrete-time systems. By means of a delta-operator approach, it is proven that the same network parameters can be used for both of these classes, even if their nonlinear output functions differ.
More complex CNN optimization problems that cannot be solved analytically necessitate resorting to numerical methods. Among these, stochastic optimization techniques such as genetic algorithms prove their usefulness, for example in image classification problems. Since the inception of the CNN, the problem of finding the network parameters for a desired task has been regarded as a learning or training problem, and computationally expensive methods derived from standard neural networks have been applied. Furthermore, numerous useful parameter sets have been derived by intuition.
In this book, a direct and exact analytical design method for the network parameters is presented. The approach yields solutions which are optimum with respect to robustness, an aspect which is crucial for successful implementation of the analog CNN hardware that has often been neglected.
`This beautifully rounded work provides many interesting and useful results, for both CNN theorists and circuit designers.'
Leon O. Chua