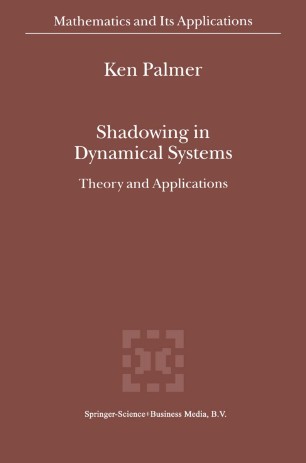 Part of the Mathematics and Its Applications book series (MAIA, volume 501)

In this book the theory of hyperbolic sets is developed, both for diffeomorphisms and flows, with an emphasis on shadowing. We show that hyperbolic sets are expansive and have the shadowing property. Then we use shadowing to prove that hyperbolic sets are robust under perturbation, that they have an asymptotic phase property and also that the dynamics near a transversal homoclinic orbit is chaotic.
It turns out that chaotic dynamical systems arising in practice are not quite hyperbolic. However, they possess enough hyperbolicity to enable us to use shadowing ideas to give computer-assisted proofs that computed orbits of such systems can be shadowed by true orbits for long periods of time, that they possess periodic orbits of long periods and that it is really true that they are chaotic.
Audience: This book is intended primarily for research workers in dynamical systems but could also be used in an advanced graduate course taken by students familiar with calculus in Banach spaces and with the basic existence theory for ordinary differential equations.