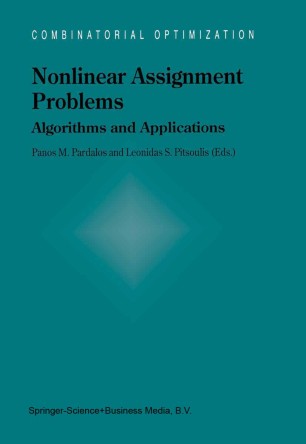 Nonlinear Assignment Problems (NAPs) are natural extensions of the classic Linear Assignment Problem, and despite the efforts of many researchers over the past three decades, they still remain some of the hardest combinatorial optimization problems to solve exactly. The purpose of this book is to provide in a single volume, major algorithmic aspects and applications of NAPs as contributed by leading international experts.
The chapters included in this book are concerned with major applications and the latest algorithmic solution approaches for NAPs. Approximation algorithms, polyhedral methods, semidefinite programming approaches and heuristic procedures for NAPs are included, while applications of this problem class in the areas of multiple-target tracking in the context of military surveillance systems, of experimental high energy physics, and of parallel processing are presented.
Audience: Researchers and graduate students in the areas of combinatorial optimization, mathematical programming, operations research, physics, and computer science.