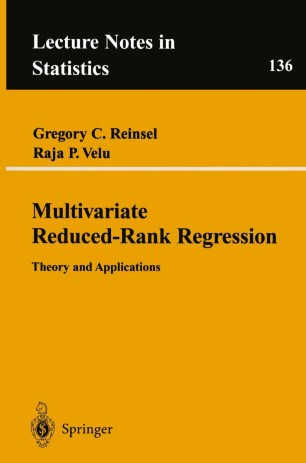 In the area of multivariate analysis, there are two broad themes that have emerged over time. The analysis typically involves exploring the variations in a set of interrelated variables or investigating the simultaneous relation­ ships between two or more sets of variables. In either case, the themes involve explicit modeling of the relationships or dimension-reduction of the sets of variables. The multivariate regression methodology and its variants are the preferred tools for the parametric modeling and descriptive tools such as principal components or canonical correlations are the tools used for addressing the dimension-reduction issues. Both act as complementary to each other and data analysts typically want to make use of these tools for a thorough analysis of multivariate data. A technique that combines the two broad themes in a natural fashion is the method of reduced-rank regres­ sion. This method starts with the classical multivariate regression model framework but recognizes the possibility for the reduction in the number of parameters through a restrietion on the rank of the regression coefficient matrix. This feature is attractive because regression methods, whether they are in the context of a single response variable or in the context of several response variables, are popular statistical tools. The technique of reduced­ rank regression and its encompassing features are the primary focus of this book. The book develops the method of reduced-rank regression starting from the classical multivariate linear regression model.