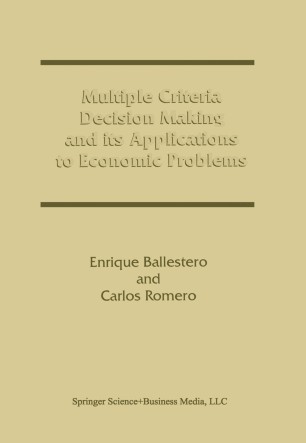 Multiple Criteria Decision Making and its Applications to Economic Problems

The volume consists of two parts. Part One of the book introduces the MCDM approaches. This first part, comprising Chapters 1-5, is basically an overview of MCDM methods that can most likely be used to address a wide range of economic problems. Readers looking for an in-depth discussion of multi-criteria analysis can grasp and become acquainted with the initial MCDM tools, language and definitions.

Part Two, which comprises Chapters 6-8, focuses on the theoretical core of the book. Thus in Chapter 6 an economic meaning is given to several key concepts on MCDM, such as ideal point, distance function, etc. It illustrates how Compromise Programming (CP) can support the standard premise of utility optimisation in economics as well as how it is capable of approximating the standard utility optimum when the decision-makers' preferences are incompletely specified. Chapter 7 deals entirely with production analysis. The main characteristic throughout the Chapter refers to a standard joint production scenario, analysed from the point of view of MCDM schemes. Chapter 8 focuses on the utility specification problem in the n-arguments space within a risk aversion context. A link between Arrows' risk aversion coefficient and CP utility permits this task.

The book is intended for postgraduate students and researchers in economics with an OR/MS orientation or in OR/MS with an economic orientation. In short, it attempts to fruitfully link economics and MCDM.