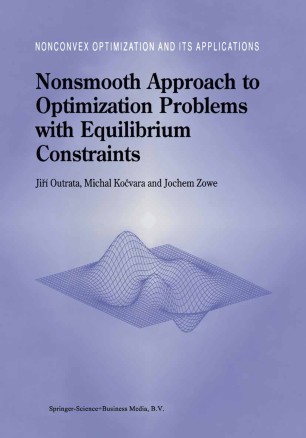 Part of the Nonconvex Optimization and Its Applications book series (NOIA, volume 28)

In the early fifties, applied mathematicians, engineers and economists started to pay c10se attention to the optimization problems in which another (lower-Ievel) optimization problem arises as a side constraint. One of the motivating factors was the concept of the Stackelberg solution in game theory, together with its economic applications. Other problems have been encountered in the seventies in natural sciences and engineering. Many of them are of practical importance and have been extensively studied, mainly from the theoretical point of view. Later, applications to mechanics and network design have lead to an extension of the problem formulation: Constraints in form of variation al inequalities and complementarity problems were also admitted. The term "generalized bi level programming problems" was used at first but later, probably in Harker and Pang, 1988, a different terminology was introduced: Mathematical programs with equilibrium constraints, or simply, MPECs. In this book we adhere to MPEC terminology. A large number of papers deals with MPECs but, to our knowledge, there is only one monograph (Luo et al. , 1997). This monograph concentrates on optimality conditions and numerical methods. Our book is oriented similarly, but we focus on those MPECs which can be treated by the implicit programming approach: the equilibrium constraint locally defines a certain implicit function and allows to convert the problem into a mathematical program with a nonsmooth objective.