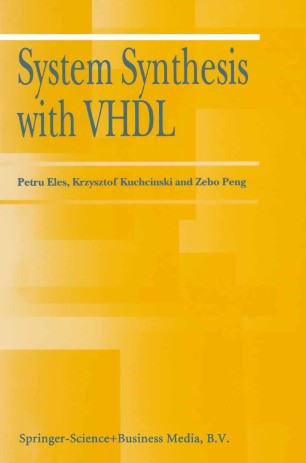 Embedded systems are usually composed of several interacting components such as custom or application specific processors, ASICs, memory blocks, and the associated communication infrastructure. The development of tools to support the design of such systems requires a further step from high-level synthesis towards a higher abstraction level. The lack of design tools accepting a system-level specification of a complete system, which may include both hardware and software components, is one of the major bottlenecks in the design of embedded systems. Thus, more and more research efforts have been spent on issues related to system-level synthesis.
This book addresses the two most active research areas of design automation today: high-level synthesis and system-level synthesis. In particular, a transformational approach to synthesis from VHDL specifications is described.
System Synthesis with VHDL provides a coherent view of system synthesis which includes the high-level and the system-level synthesis tasks. VHDL is used as a specification language and several issues concerning the use of VHDL for high-level and system-level synthesis are discussed. These include aspects from the compilation of VHDL into an internal design representation to the synthesis of systems specified as interacting VHDL processes.
The book emphasizes the use of a transformational approach to system synthesis. A Petri net based design representation is rigorously defined and used throughout the book as a basic vehicle for illustration of transformations and other design concepts. Iterative improvement heuristics, such as tabu search, simulated annealing and genetic algorithms, are discussed and illustrated as strategies which are used to guide the optimization process in a transformation-based design environment. Advanced topics, including hardware/software partitioning, test synthesis and low power synthesis are discussed from the perspective of a transformational approach to system synthesis.
System Synthesis with VHDL can be used for advanced undergraduate or graduate courses in the area of design automation and, more specifically, of high-level and system-level synthesis. At the same time the book is intended for CAD developers and researchers as well as industrial designers of digital systems who are interested in new algorithms and techniques supporting modern design tools and methodologies.