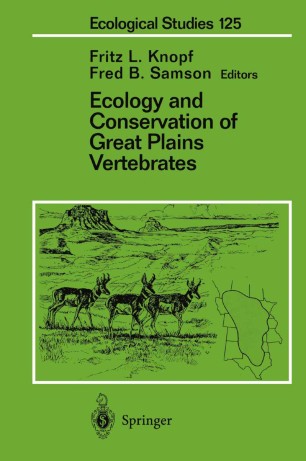 The frontier images of America embrace endless horizons, majestic herds of native ungulates, and romanticized life-styles of nomadie peoples. The images were mere reflections of vertebrates living in harmony in an ecosystem driven by the unpre­ dictable local and regional effects of drought, frre, and grazing. Those effects, often referred to as ecological "disturbanees," are rather the driving forces on which species depended to create the spatial and temporal heterogeneity that favored ecological prerequisites for survival. Alandscape viewed by European descendants as monotony interrupted only by extremes in weather and commonly referred to as the "Great American Desert," this country was to be rushed through and cursed, a barrier that hindered access to the deep soils of the Oregon country, the rich minerals of California and Colorado, and the religious freedom sought in Utah. Those who stayed (for lack of resources or stamina) spent a century trying to moderate the ecological dynamics of Great Plains prairies by suppressing fires, planting trees and exotic grasses, poisoning rodents, diverting waters, and homogenizing the dynamies of grazing with endless fences-all creating bound­ an otherwise boundless vista. aries in Historically, travelers and settlers referred to the area of tallgrasses along the western edge of the deciduous forest and extending midway across Kansas as the "True Prairie. " The grasses thlnned and became shorter to the west, an area known then as the Great Plains.