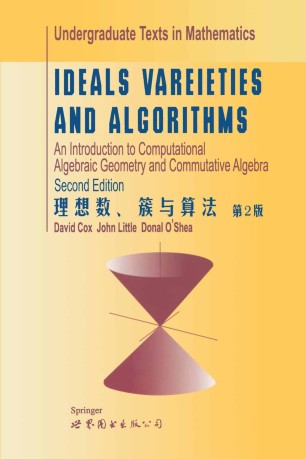 An Introduction to Computational Algebraic Geometry and Commutative Algebra

Algebraic Geometry is the study of systems of polynomial equations in one or more variables, asking such questions as: Does the system have finitely many solutions, and if so how can one find them? And if there are infinitely many solutions, how can they be described and manipulated? The solutions of a system of polynomial equations form a geometric object called a variety; the corresponding algebraic object is an ideal. There is a close relationship between ideals and varieties which reveals the intimate link between algebra and geometry. Written at a level appropriate to undergraduates, this book covers such topics as the Hilbert Basis Theorem, the Nullstellensatz, invariant theory, projective geometry, and dimension theory. The algorithms to answer questions such as those posed above are an important part of algebraic geometry. This book bases its discussion of algorithms on a generalization of the division algorithm for polynomials in one variable that was only discovered in the 1960's. Although the algorithmic roots of algebraic geometry are old, the computational aspects were neglected earlier in this century. This has changed in recent years, and new algorithms, coupled with the power of fast computers, have let to some interesting applications, for example in robotics and in geometric theorem proving. In preparing a new edition of Ideals, Varieties and Algorithms the authors present an improved proof of the Buchberger Criterion as well as a proof of Bezout's Theorem. Appendix C contains a new section on Axiom and an update about Maple , Mathematica and REDUCE.