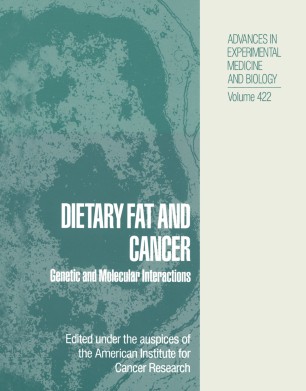 Part of the Advances in Experimental Medicine and Biology book series (AEMB, volume 422)

The annual research conference for 1996 of the American Institute for Cancer Re­ search was again held at the Loews L'Enfant Plaza Hotel in Washington, DC, August 29 and 30. The topic for this, the seventh in the series, was "Dietary Fat and Cancer: Genetic and Molecular Mechanisms. " Two separate presentations were given as the conference overview. "Fat and Cancer: The Epidemiologic Evidence in Perspective" noted that die­ tary fat can be saturated, largely from animal or dairy sources, or mono- or polyunsatu­ rated, mostly from plant sources. Unlike animal fats, fish contain relatively high levels of protective omega-3 fatty acids. Although the hypothesis that dietary fat is associated with cancer is plausible, the mechanisms involved are reasonable, and many animal studies support the hypothesis, there are many obstacles in any direct extrapolation to humans, in­ cluding imprecise measures of dietary fat intake, variability in individual diets, and spe­ cies variations. Despite these limitations, there is a weak positive correlation between colon cancer and dietary fat intake, but with substantial differences for various ethnic groups. In the case of breast cancer, there is substantial variation among countries and eth­ nic groups, but the overall evidence indicated an association with fat in the diet. Epidemiologic studies of dietary fat and prostate cancer are more consistent and most show a positive relationship. However, it was not clear which types of dietary fat were im­ plicated in the effect.