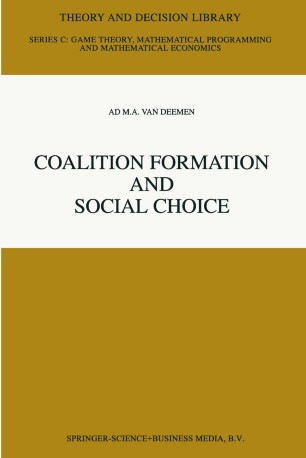 Coalition Formation and Social Choice provides a unified and comprehensive study of coalition formation and collective decision-making in committees. It discusses the main existing theories including the size principle, conflict of interest theory, dominant player theory, policy distance theory and power excess theory. In addition, the book offers new theories of coalition formation in which the endogenous formation of preferences for coalitions is basic. Both simple game theory and social choice theory are extensively applied in the treatment of the theories. This combined application not only leads to new theories but also offers a new and fresh perspective on coalition formation and collective decision-making in committees.
The book covers the fundamental concepts and results of social choice theory including Arrow's Impossibility Theorem. Furthermore, it gives a coherent treatment of the theory of simple games. Besides more traditional topics in simple game theory like power indices, it also introduces new aspects of simple games such as the Chow parameter, the Chow vector and the notion of similar games.