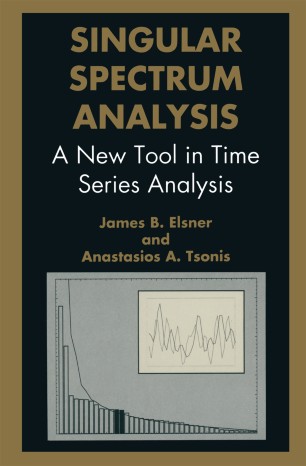 The term singular spectrum comes from the spectral (eigenvalue) decomposition of a matrix A into its set (spectrum) of eigenvalues. These eigenvalues, A, are the numbers that make the matrix A -AI singular. The term singular spectrum analysis· is unfortunate since the traditional eigenvalue decomposition involving multivariate data is also an analysis of the singular spectrum. More properly, singular spectrum analysis (SSA) should be called the analysis of time series using the singular spectrum. Spectral decomposition of matrices is fundamental to much the­ ory of linear algebra and it has many applications to problems in the natural and related sciences. Its widespread use as a tool for time­ series analysis is fairly recent, however, emerging to a large extent from applications of dynamical systems theory (sometimes called chaos theory). SSA was introduced into chaos theory by Fraedrich (1986) and Broomhead and King (l986a). Prior to this, SSA was used in biological oceanography by Colebrook (1978). In the digi­ tal signal processing community, the approach is also known as the Karhunen-Loeve (K-L) expansion (Pike et aI., 1984). Like other techniques based on spectral decomposition, SSA is attractive in that it holds a promise for a reduction in the dimen- • Singular spectrum analysis is sometimes called singular systems analysis or singular spectrum approach. vii viii Preface sionality. This reduction in dimensionality is often accompanied by a simpler explanation of the underlying physics.