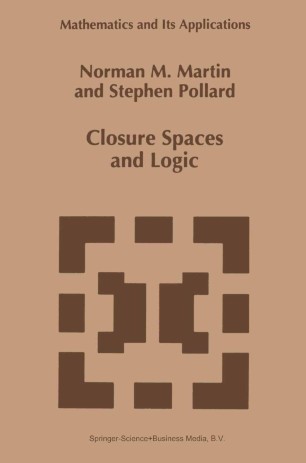 Part of the Mathematics and Its Applications book series (MAIA, volume 369)

This book examines an abstract mathematical theory, placing special emphasis on results applicable to formal logic. If a theory is especially abstract, it may find a natural home within several of the more familiar branches of mathematics. This is the case with the theory of closure spaces. It might be considered part of topology, lattice theory, universal algebra or, no doubt, one of several other branches of mathematics as well. In our development we have treated it, conceptually and methodologically, as part of topology, partly because we first thought ofthe basic structure involved (closure space), as a generalization of Frechet's concept V-space. V-spaces have been used in some developments of general topology as a generalization of topological space. Indeed, when in the early '50s, one of us started thinking about closure spaces, we thought ofit as the generalization of Frechet V­ space which comes from not requiring the null set to be CLOSURE SPACES ANDLOGIC XlI closed(as it is in V-spaces). This generalization has an extreme advantage in connection with application to logic, since the most important closure notion in logic, deductive closure, in most cases does not generate a V-space, since the closure of the null set typically consists of the "logical truths" of the logic being examined.