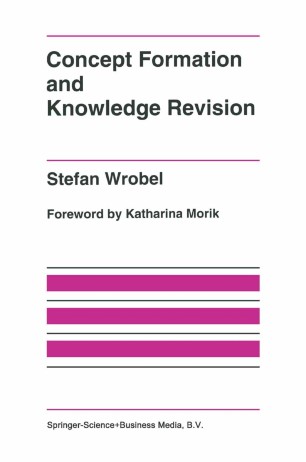 A fundamental assumption of work in artificial intelligence and machine learning is that knowledge is expressed in a computer with the help of knowledge representations. Since the proper choice of such representations is a difficult task that fundamentally affects the capabilities of a system, the problem of automatic representation change is an important topic in current research. Concept Formation and Knowledge Revision focuses on representation change as a concept formation task, regarding concepts as the elementary representational vocabulary from which further statements are constructed.
Taking an interdisciplinary approach from psychological foundations to computer implementations, the book draws on existing psychological results about the nature of human concepts and concept formation to determine the scope of concept formation phenomena, and to identify potential components of computational concept formation models. The central idea of this work is that computational concept formation can usefully be understood as a process that is triggered in a demand-driven fashion by the representational needs of the learning system, and identify the knowledge revision activities of a system as a particular context for such a process.
The book presents a detailed analysis of the revision problem for first-order clausal theories, and develops a set of postulates that any such operation should satisfy. It shows how a minimum theory revision operator can be realized by using exception sets, and that this operator is indeed maximally general. The book then shows that concept formation can be triggered from within the knowledge revision process whenever the existing representation does not permit the plausible reformulation of an exception set, demonstrating the usefulness of the approach both theoretically and empirically within the learning knowledge acquisition system MOBAL.
In using a first-order representation, this book is part of the rapidly developing field of Inductive Logic Programming (ILP). By integrating the computational issues with psychological and fundamental discussions of concept formation phenomena, the book will be of interest to readers both theoretically and psychologically inclined.

From the foreword by Katharina Morik:

` The ideal to combine the three sources of artificial intelligence research has almost never been reached. Such a combined and integrated research requires the researcher to master different ways of thinking, different work styles, different sets of literature, and different research procedures. It requires capabilities in software engineering for the application part, in theoretical computer science for the theory part, and in psychology for the cognitive part. The most important capability for artificial intelligence is to keep the integrative view and to create a true original work that goes beyond the collection of pieces from different fields.
This book achieves such an integrative view of concept formation and knowledge revision by presenting the way