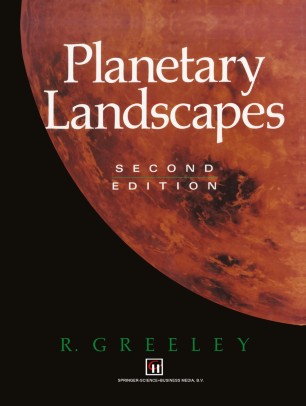 The objective of this book is to introduce the surface of the objects in the Solar System, the individual treatment features of the planets and satellites in the context of varies among the chapters. For example, it was difficult geomorphic processes. Introductory chapters include the to decide what to leave out of the chapter on Mars because "bows" and "whys" of Solar System exploration and a so much is known about the surface, whereas data are review of the primary processes that shape our planet, rather limited for Mercury. Earth, and which appear to be important to planetary In addition to introducing the geomorphology of plane­ sciences. The remaining chapters describe the geomor­ tary objects, this book is intended to be a "source" for phology of the planets and satellites for which data are obtaining supplemental information. References are cited available. For most of these objects, the general physiog­ throughout the text. However, these citations are not raphy and terrain units for each are introduced, then the intended to be exhaustive but rather are given to provide geomorphic processes that are inferred for the develop­ a "springboard" for additional literature surveys.

Reviews of the first edition:; I highly recommend Planetary Landscapes for upper level students and as a reference to any other planetary course. - Journal of Geoscience Education; ...the definitive summary text for undergraduate students of surface processes... - Journal of the British Astronomical Society; The reproduction of the images...is among the best I have seen...The overall effect is stunning -Nature; Reviews of this edition: The second edition of this much admired text about planetary landscapes lives up to the high reputation of its predecessor...an excellent book and should be on the shelves of everyone with more than a passing interest in planetary science - Geological Magazine; I cannot recommend this book highly enough to all teachers of introductory courses - Geoscientist; ...much better than most that attempt short overviews into complicated fields...a very useful book for anyone interested in planetary science. - Technophysics
Buy options