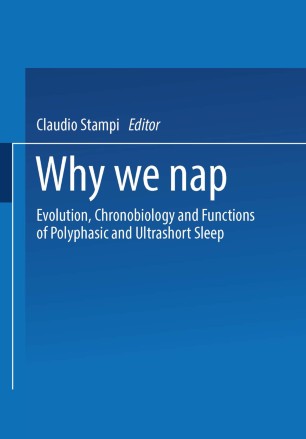 Evolution, Chronobiology, and Functions of Polyphasic and Ultrashort Sleep

J ÜRGEN AscHOFF "Very bad habit! Very bad habit!" Captain Giles to Joseph Conrad who had taken a siesta. -Conrad: The Shadow Line On the Multiplicity of Rest-Activity Cycles: Some Historical and Conceptual Notes According to its title this book tries to answer the profound question of why we nap-and why Captain Giles was wrong in blaming Conrad for having napped. However, in this volume the term nap is not used in the narrower sense of an afternoon siesta; instead, emphasis is placed on the recurrent alternation between states of alertness and drowsiness, i. e. , on rest-activity cycles of high er frequency throughout the 24 hr. In view of this focus, two authors (Stampi, in Chapter I, and Ball, in Chapter 3) rightly refer to the psychologist Szymanski who was among the first to describe "polyphasic" activity patterns. Hence, I consider it appropriate to open this foreword with a few historical remarks. At the time when Szymanski (1920) made the distinction between "monophasic" and "polyphasic" rest-activity patterns and sleep-wake cy­ cles, respectively, not much was known about the mechanisms of such temporal structures. Although the botanists quite some time ago had demonstrated the endogenous nature of the "monophasic" sleep movements in plants, the hypothesis of an (still unknown) external driving force was favored by those who studied rhythms in animals and humans (Aschoff, 1990).