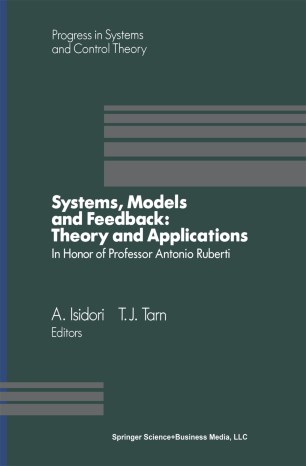 Proceedings of a U.S.-Italy Workshop in honor of Professor Antonio Ruberti, Capri, 15–17, June 1992

Part of the Progress in Systems and Control Theory book series (PSCT, volume 12)

It is a great honor and privilege to have this opportunity of celebrating the 65th birthday of Professor Antonio Ruberti by holding an International Conference on Systems, Models and Feedback. The conference, and this volume which contains its proceedings, is a tribute to Professor Ruberti in acknowledgement of his major contributions to System Theory, at a time in which this area was emerging and consolidat­ ing as an independent discipline, his role as a leader of the Italian academic community, his activity in promoting and fostering close scientific relations between Italian and U.S. scholars in Systems and Control. The format of this conference is inspired by a series of seminars initi­ ated exactly twenty years ago under the direction of Professor Ruberti, in Italy, and Professor R. R. Mohler, in the U.S. By bringing together many authoritative talents from both countries, these seminars were instrumental in promoting the expansion of System Theory in new areas, notably that of Nonlinear Control, and were the key to successful scientific careers for many of the younger attendants.