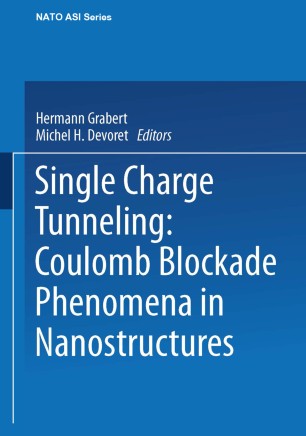 The field of single charge tunneling comprises of phenomena where the tunneling of a microscopic charge, usually carried by an electron or a Cooper pair, leads to macro­ scopically observable effects. The first conference entirely devoted to this new field was the NATO Advanced Study Institute on Single Charge Tunneling held in Les Hauches, France, March 5-15, 1991. This book contains a series of tutorial articles based on lectures presented at the meeting. It was intended to provide both an introduction for nonexperts and a valuable reference summarizing the state of the art of single charge tun­ neling. A complementary publication with contributions by participants of the NATO Advanced Study Institute is the Special Issue on Single Charge Tunneling of Zeitschrift für Physik B, Vol. 85, pp. 317-468 (1991 ). That issue with original papers provides a snapshot af the leading edge of current research in the field. The success of the meeting and the publicatian of this volume was made possible through the generaus support af the NATO Scientific A:ffairs Division, Brussels, Belgium. The Centre de Physique des Hauches has provided a superbly situated conference site and took care af many lacal arrangements. Both far the preparation of the conference and the handling af some manuscripts the suppart af the Centre d 'Etudes de Saclay was essential. The editing of the proceedings volume would not have been passible without the dedicated efforts of Dr. G. -1. Ingald, who tailared a 1\.