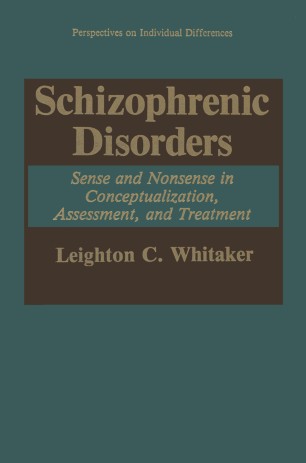 Sense and Nonsense in Conceptualization, Assessment, and Treatment

No diagnosis of mental disorder is more important or more disputable than that of "schizophrenia." The 1982 case of John Hinckley, who shot President Reagan, brought both aspects of this diagnostic dilemma to the forefront of national attention. It became evident to the general public that the experts engaged to study him exhaustively could not agree on whether Hinckley was schizophrenic. General public outrage ensued, as schizophrenia, "the sacred symbol of psychiatry," in the words of Thomas Szasz (1976), emerged as a king of Alice in Wonderland travesty. Schizo­ phrenia seemed not to be a legitimate diagnostic entity but some sort of facade erected to protect the guilty. In 1973, David Rosenhan had already shown the readers of Science that schizo­ phrenia was a label that could be given to normal people presenting with a supposed auditory hallucination on even one occasion. In Rosenhan's studies, mental health professionals were outclassed by the regular psychiatric hospital patients, who cor­ rectly saw the false schizophrenics as imposters while the professional diagnosticians continued to fool themselves.