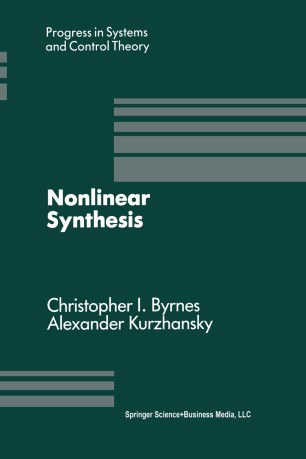 Proceedings of a IIASA Workshop held in Sopron, Hungary June 1989

Part of the Progress in Systems and Control Theory book series (PSCT, volume 9)

In its broadest sense, nonlinear synthesis involves in fact the synthesis of sometimes so­ phisticated or complex control strategies with the aim of prescribing, or at least influencing, the evolution of complex nonlinear systems. Nonlinear synthesis requires the development of methodologies for modeling complex systems, for the analysis of nonlinear models, and for the systematic design of control schemes or feedback laws which can achieve a wide variety of prescribed objectives. The modeling, analysis and control of complex systems in the face of uncertainty form on of the major components of the current research program in the Department of Systems and Decision Sciences (SDS) at the International Institute for Applied Systems Analysis (IIASA). In June 1989, a IIASA workshop on Nonlinear Synthesis, sponsored by SDS, was held in Sopron, Hungary. We are proud to present this volume as the proceedings of this workshop, a workshop attened by prominent researchers in nonlinear systems from both the East and the West. Since the promotion and encouragement of scientific cooperation between researchers in the East and in the West is one of the goals at IIASA, we feel the Sopron Conference on Nonlinear Synthesis was very successful. Moreover, we were especially pleased by the impressive new advances presented at the workshop which, in this volume, are now part of the conference record.