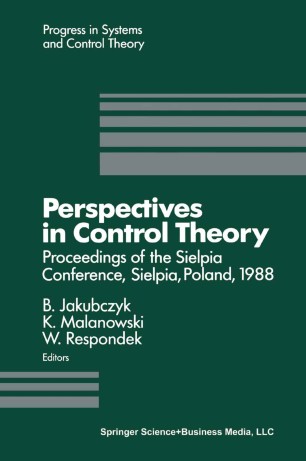 Part of the Progress in Systems and Control Theory book series (PSCT, volume 2)

The volume contains papers based on lectures delivered during the school "Per­ spectives in Control Theory" held in Sielpia, Poland on September 19-24, 1988. The aim of the school was to give the state-of-the-art presentation of recent achievements as weH as perspectives in such fields of control theory as optimal control and optimization, linear systems, and nonlinear systems. Accordingly, the volume includes survey papers together with presentations of some recent results. The special emphasis is put on: - nonlinear systems (algebraic and geometric methods), - optimal control and optimization (general problems, distributed parameter systems), - linear systems (linear-quadratic problem, robust stabilization). An important feature of the school (and consequently of the volume) was its really "international" character since it brought together leading control theoriests from West and East. All together the school was attended by 108 participants from 18 countries. During the school 21 one-hour invited lectures were delivered. Moreover, five half-an-hour talks were given and 30 contributions were presented in frames of poster sessions. The school was organized and supported by: Institute of Mathematics of the Polish Academy of Sciences, Committee of Automatic Control and Robotics of the Polish Academy of Sciences, - Institute of Automatic Control, Warsaw University of Technology (as Co­ ordinator of the Basic Research Program R.P.I.02 "Theory of Control of Continuous Dynamic Systems and Discrete Processes" ).