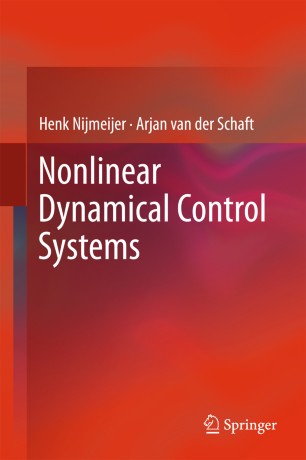 This book has recently been  retypeset in LaTeX for clearer presentation.
This textbook on the differential geometric approach to nonlinear control grew out of a set of lecture notes, which were prepared for a course on nonlinear system theory, given by us for the first time during the fall semester of 1988. The audience consisted mostly of graduate students , taking part in the Dutch national Graduate Program on Systems and Control.
The course gives a general introduction to modern nonlinear control theory (with an emphasis on the differential geometric approach), as well as providing students specializing in nonlinear control theory with a firm starting point for doing research in this area. One of the authors' primary objectives is to give a self-contained treatment of all the topics covered. Although the amount of work published on nonlinear geometric control theory is expanding rapidly expanding, the authors confine themselves to treating solid and clear-cut achievements of modern nonlinear control, which can be expected to be of remaining interest. The final selection of topics reflects the authors' own judgement of their importance.