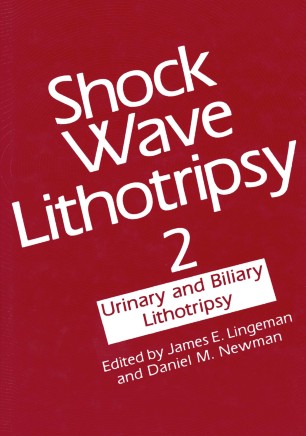 In the years since its development in West Gennany and particularly since its arrival in the United States, extracorporeal shock wave lithotripsy (ESWL') has become the treatment of choice for most cases of urinary lithiasis. The fIrst shock wave lithotripsy patient in the U.S. was treated with a Domier HM3 in February of 1984 at the Methodist Hospital of Indiana. In response to the great enthusiasm generated by this new treatment modality, the following year the MHI presented its fIrst symposium on shock wave lithotripsy. Each year the meeting generated more and more interest. Following the 1988 symposium, the presentations were published in a book entitled Shock Wave Lithotripsy: State of the Art. Following on the heels of the success of kidney stone treatment with ESWL, the new field of biliary lithotripsy rapidly was gaining momentum. In response to the great interest generated by this additional application of the technology, the 1989 meeting focused special attention on this new method of treating gallstones. Methodist Hospital's 5th Symposium on Shock Wave Lithotripsy, which was presented in March of 1989, had the largest attendance ever, with over 600 physicians from 42 states and 20 countries. The publication of the proceedings of this meeting was made possible by generous educational grants from Domier Medical Systems, Inc., Marietta, Georgia, and the Methodist Hospital of Indiana. The primary purpose of the publication of the proceedings of this symposium is educational.