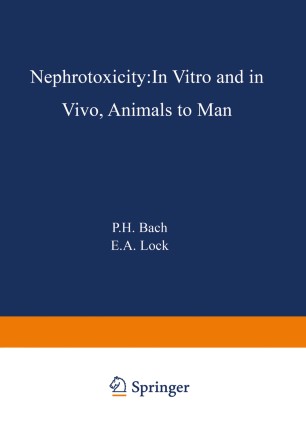 In Vitro to In Vivo Animals to Man

There has been a growing awareness that nephrotoxicity represents a key factor in human nephropathies, where, irrespective of the causative agent, only a few clinical end-effects are diagnosed. Thus nephropathies are generally classified as acute or chronic renal failure, malignancies or immunological changes. The weaknesses in diagnosing nephropathies arises because of the effective role the kidney plays in maintaining homeostasis, despite the fact that it has been extensively damaged. The frequencies of some type of chemically-induced acute renal failure is well documented, but the causes of chronic renal failure, malignancy, and other nephropathies are far more difficult to associate with a chemical aetiology. Many of the new therapeutic agents have important beneficial effects, but they are found to have marked nephrotoxic effects. Thus there is a growing urgency to increase the stringency of chemical safety evaluation for their potential nephrotoxic effects. This is strongly countered by the increased financial pressure to identify potentially nephrotoxic chemicals earlier in their development and humanitarian considerations to more closely relate animal test to the clinical situation. Part of the challenge may be achieved by the increasing use of in vitro techniques.