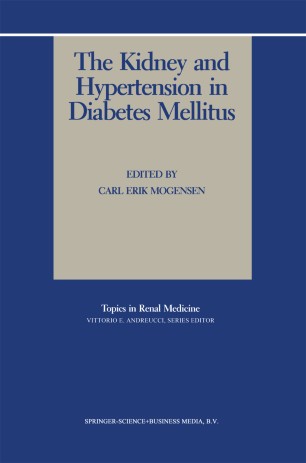 The Kidney and Hypertension in Diabetes Mellitus

The first sporadic observations describing renal abnormalities in diabetes were published late in the 19th century, but systematic studies of the kidney in diabetes started only half a century ago after the paper by Cambier in 1934 and the much more famous study by Kimmelstiel and Wilson in 1936. These authors described two distinct features of renal involvement in diabetes: early hyperfiltration and late nephropathy. Diabetic nephropathy is, despite half a century of studies, still a very pertinent problem, renal disease in diabetes now being a very common cause of end-stage renal failure in Europe and North America and probably throughout the world. It is a very important part of the generalized vascular disease found in long-term diabetes as described by Knud Lundbaek in his mono graph Long-term Diabetes in 1953, published by Munks­ gaard, Copenhagen. Surprisingly, there has not been a comprehensive volume describing all aspects of renal involvement in diabetes, and the time is now ripe for such a volume summarizing the very considerable research activity within this field during the last decade and especially during the last few years. This book attempts to cover practically all aspects of renal involvement in diabetes. It is written by colleagues who are themselves active in the many fields of medical research covered in this volume: epidemiology, physiology and pathophysiology, laboratory methodology, and renal pathology. New studies deal with the dia gnosis and treatment of both incipient and overt nephropathy by metabolie, antihypertensive, and dietary invention.