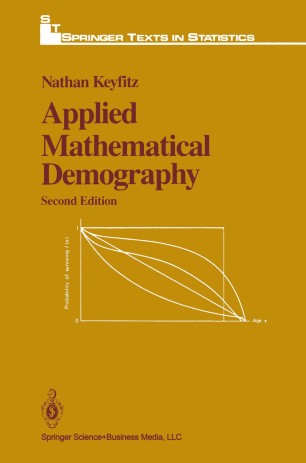 What follows is a new edition of the second in a series of three books providing an account of the mathematical development of demography. The first, Introduction to the Mathematics of Population (Addison-Wesley, 1968), gave the mathematical background. The second, the original of the present volume, was concerned with demography itself. The third in the sequence, Mathematics Through Problems (with John Beekman; Springer­ Verlag, 1982), supplemented the first two with an ordered sequence of problems and answers. Readers interested in the mathematics may consult the earlier book, republished with revisions by Addison-Wesley in 1977 and still in print. There is no overlap in subject matter between Applied Mathematical Demography and the Introduction to the Mathematics of Population. Three new chapters have been added, dealing with matters that have come recently into the demographic limelight: multi-state calculations, family demogra­ phy, and heterogeneity. vii PREFACE This book is concerned with commonsense questions about, for instance, the effect of a lowered death rate on the proportion of old people or the effect of abortions on the birth rate. The answers that it reaches are not always commonsense, and we will meet instances in which intuition has to be adjusted to accord with what the mathematics shows to be the case.