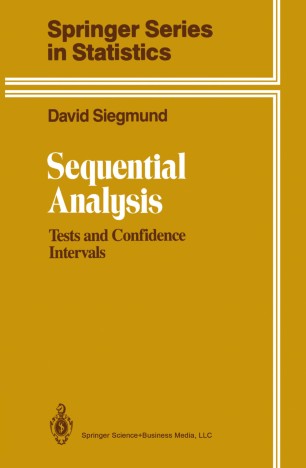 The modern theory of Sequential Analysis came into existence simultaneously in the United States and Great Britain in response to demands for more efficient sampling inspection procedures during World War II. The develop­ ments were admirably summarized by their principal architect, A. Wald, in his book Sequential Analysis (1947). In spite of the extraordinary accomplishments of this period, there remained some dissatisfaction with the sequential probability ratio test and Wald's analysis of it. (i) The open-ended continuation region with the concomitant possibility of taking an arbitrarily large number of observations seems intol­ erable in practice. (ii) Wald's elegant approximations based on "neglecting the excess" of the log likelihood ratio over the stopping boundaries are not especially accurate and do not allow one to study the effect oftaking observa­ tions in groups rather than one at a time. (iii) The beautiful optimality property of the sequential probability ratio test applies only to the artificial problem of testing a simple hypothesis against a simple alternative. In response to these issues and to new motivation from the direction of controlled clinical trials numerous modifications of the sequential probability ratio test were proposed and their properties studied-often by simulation or lengthy numerical computation. (A notable exception is Anderson, 1960; see III.7.) In the past decade it has become possible to give a more complete theoretical analysis of many of the proposals and hence to understand them better.